Or, translated, the lovers.

Along with the Clos St Jacques in Gevrey-Chambertin, Les Amoureuses is the greatest premier cru vineyard in the Côte de Nuits and one that is a candidate for promotion to grand cru.  This is widely accepted, and the prices of the wines reflect that.

The vineyard covers 5.42 hectares, just east and downslope from Le Musigny.  Robert Groffier has the largest holding of the vineyard, with Mugnier, de Vogue and Roumier making some of the most sought after examples.

As Clive Coates writes in “The Wines of Burgundy”, the vineyard is “really a sort of younger brother to Musigny itself: perfumed, silky smooth, intense and soft rather than brutal and muscular, and with real finesse.”  This sums it up well though, as with much of Burgundy, the clue is in the name.

Les Amoureuses is a seductive, sensual wine, one that dances in the mouth.  It is the epitome of Chambolle, in a more playful, more youthful, way than Le Musigny itself.

As with nearly all fine Burgundy there is not much of it.  Our current listings of Chambolle Les Amoureuses can be seen by clicking HERE. 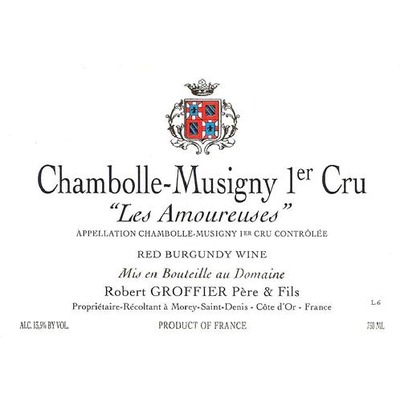